In my Ep. 21 vlog, I mention Viddyoze as my most recommended secondary video creation app.

But what I showed there was my review of the 2.0 version.

And now they're releasing version 3.0, which is according to them, is their final version. So WHY am I recommending Viddyoze 3.0?

Like I always say, there are always new video creation apps being developed every now and then because marketers know that video apps sell well.

But the truth is, most video creation apps released in this industry are not so good, and some are even next to useless.

Well, most of these apps were developed by marketers who only want to take advantage of the "video trend," but know nothing about video creation.

I'm saying this after reviewing so many apps of this kind already.

As someone who came from the professional video creation industry, I've been ignoring those apps from the beginning.

However, I came to understand that most video marketers just wanted to create videos the EASY way.

The problem is, vendors abused this situation and lured most people to grab their so called apps that allows them to create pro videos the easily.

In fact, most of those apps just survived less than a year and then were discontinued.

But Viddyoze has been there for a while now and they've been improving the app since then.

With over 80,000 users (and growing), Viddyoze will surely stay.

And unlike other apps that were just developed by vendors who know nothing about video creation, Viddyoze has Joey Xoto, who also has a professional video creation background.

And users can testify that the team behind this app is solid.

Because it's your ticket to pro video graphics creation, even if you're a not a professional animator or something.

Let's face it, no matter how great a product is, if you don't need it, why bother, right?

Well, as long as you do marketing through videos, or you create videos in any way, I gotta say you can find Viddyoze useful.

Although Viddyoze is not a primary video creation tool like Adobe Premiere, Vidtasia, Final Cut Pro, and the likes, it definitely makes your video look a lot better.

But will it help you make money?

Well, not necessarily, but indirectly, yes it can.

It can make you create marketing videos that stand out, thus, grab the attention of your target audience better.

You can also provide video creation as a service, and use Viddyoze to easily create pro video graphics for your clients.

So if you didn't get that yet, better grab it (or upgrade to 3.0 if you got the previous version)....

Grab Viddyoze 3.0 from this page and get the following EXLUSIVE Bonuses... WHY Interactive Videos Are Great in 2020

Fade to Black – A Review from A PRO Video Creator…

Do Meetings, Live Webinars, & Auto Webinars, in One Platform

[Ep. 61] How to Edit Videos Right On Your Browser

Cham Altatis is a video guy who jumped into the internet marketing world. He is currently teaching small business owners from around the world on how to promote their products and services online through videos. 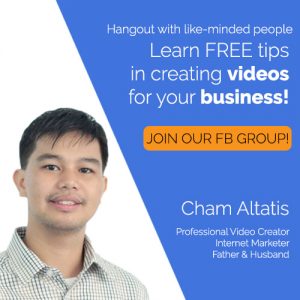 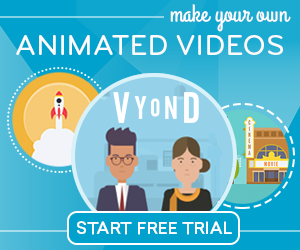